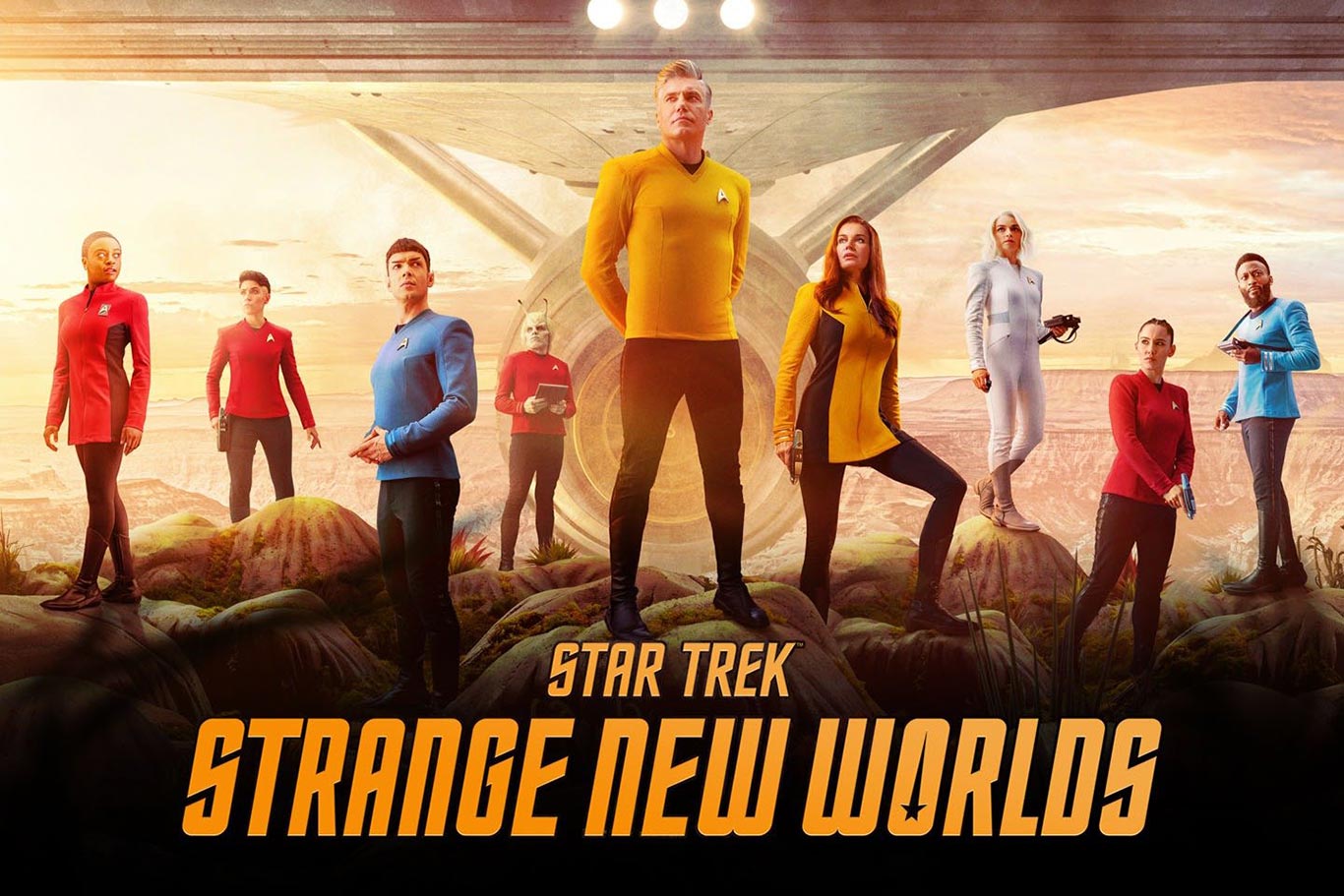 Wonder Bread Visions and the Future of Western Civilization

The storylines of recent movies and streaming series have attempted to tackle a horrifying but very real threat: global apocalypse. However, the creators of many of these franchises, including James DeMonaco of The Purge, seem unable to imagine a world in which the United States of America ceases to exist, a reality in which white folks aren’t running everything. For the most part, these creators misunderstand how racism functions in the US. They also fail to grasp how central racism would be to a fascist takeover of the US and the subsequent civil war.

Writers of these newer franchises attempt to explain how the US, and planet earth, face decline and collapse significant enough to kill billions. Even so, they tend to narrate their speculative stories with Pollyanna-ish whiteness and plucky optimism.

Season 1 of Star Trek: Strange New Worlds falls victim to these problems. The franchise’s team, Akiva Goldsman, Alex Kurtzman, and Jenny Lumet, fail to imagine beyond a reality dominated by the global North. In Star Trek: SNW, a spinoff from Season 2 of Star Trek: Discovery, character Michael Burnham, played by the first female Black lead in the franchise, actress Sonequa Martin-Green, must constantly prove herself to her white Earthling and pinkskin alien superiors. This is a powerful season with Martin-Green at her absolute best, but Discovery’s producers sent her and her crew 930 years into the future only to produce another iteration of the white male space cowboy series originally imagined by Gene Roddenberry.

Understand that I always been a sucker for end-of-days, post-apocalyptic, and futuristic movies and television series. Some from my formative years were unbelievable to the point of absurd, like Damnation Alley (1977) which starred George Peppard, Paul Winfield, and a host of man-eating, radioactive roaches. Others, like ABC’s The Day After (1983), gave me mushroom-cloud nightmares for years at a time. When it comes to the end of the world, nothing has topped Terminator 2 (1991). I watched its nuclear blast and fire sequence with incredible dread. Still, I was miffed that the only Black actor with a significant role in the film, the great Joe Morton, was responsible for designing the chip that doomed humanity. When I said as much to a friend as we left a Pittsburgh-area theater, he replied, “At least a Black man had a significant role doing something.”

My friend was partly correct. Representation matters, but only if the representative — along with the directors and the producers in any institution — can bring to bear their expertise, their experiences, and their convictions. The representative should be seen and heard. In acting, representation without such commitment and expertise equates to tokenism, the hiring of an actor of color merely to diversify a cast. Exclusion can happen, even with inclusion, because without a voice, any Black or Brown actor can also become a wooden figure or puppet.

Movies and television series about the collapse of the US or the end of the world require actors of color. Without us, these productions lack gravitas and tip into foolishness. In Independence Day (1996), Bill Pullman plays a white president facing extra-terrestrial invasion. The plot descends into silliness when he announces, “We can’t be consumed by our petty differences anymore.” It pissed me off to witness this shallow call for unity in the face of annihilation. Do white writers really think that racism and inequality are “petty differences?” Neary 30 years later, “petty differences” such as racism, class inequality, climate, the COVID-19 pandemic, and supremacist governance threaten to plunge the US into civil war. There is no need for ET to invade us.

On the other hand, performances by people of color made The Matrix (1999) believable. Both Lawrence Fishburne and Keanu Reeves understood that mental imprisonment is an ever-present reality beyond AI machines. They acted as such, and their performances conveyed racial reality. When Reeves’ angry Neo said, “No, I don’t believe it. It’s not possible,” every Black Gen Xer who had seen Roots as a child understood the trauma of his disillusionment. When Fishburne’s Morpheus, steady-voiced and sympathetic, said, “I didn’t say it would be easy. I just said it would be the truth,” it was his energy as truth-bearer that made the trauma of that moment bearable. The Matrix would have been just another post-apocalyptic science fiction film, and not a four-film franchise, if white actors had been cast in these roles. Without the emotional license taken by Fishburne and Reeves, The Matrix would not have become “the desert of the real” for us.

The same is true for Discovery, and its year-long handoff to SNW. Martin-Green imbued Michael Burnham with so much of her own righteous conviction and charism that even a rote script came alive with meaning. I could feel the trauma experienced by her character, the loss of her parents and her struggle to be her best and full self. I felt this because I could sense Martin-Green bringing Black women’s lived experiences to the screen, especially with the brief encounters with her biological mother (played by Sonja Sohn). That is more than representation, and much more than inclusion. That is Martin-Green creating a world in which Blackness is exuded through word and thought, making a concept like the Federation — and a post-Western world — possible.

Martin-Green was at her most emotional in the scenes before Burnham leaves Discovery to stop an AI program from destroying sentient life across the Milky Way. Burnham’s “I love you” to the crew nearly caused every actor to tear up. Their decision to stay with her through the battle and fly with Burnham into the future nearly made Martin-Green do the same. Her goodbye to her adoptive Vulcan parents (also Spock’s parents), thanking them for “putting [her] back together again…piece by piece” evokes a trauma of both Burnham’s past as well as a more distant past. Martin-Green’s stage presence pushed actors like Anson Mount and Ethan Peck to raise their level of acting intensity too. And this was just Season 2: Episode 13.

Discovery is a series full of such intensity. It’s not just a crew or a cast. It’s community. It’s family with Martin-Green at the center of it all, the Black philosopher-warrior-matriarch of the series.

Strange New Worlds suffers in direct comparison to its birth series. SNW began with its first episode in May, plunging into civil war and apocalypse. Anson Mount as Captain Christopher Pike is also caught in the middle of planet Kiley 279’s global war. With their planet’s ecosystem on the brink, the Kilean find themselves on the verge of extinction, just like the one Pike’s Earth suffered in the mid-21st century.

“I’ve seen my future. Let me show you yours,” Pike says as the Enterprise streams footage of American riots and protests from the early 2020s. “Our conflict also started with a fight for freedoms. We called it the Second Civil War” — an obvious reference to the US — “then the Eugenics War, and finally just World War III. This was our last day. The day the Earth we knew ceased to exist.” Cut to footage of cities being nuked. “What began as an eruption in one nation, ended in the eradication of 600,000 species of animals and plants and 30 percent of Earth’s population…You’ll use competing ideas of liberty to bomb each other to rubble, just like we did, and then your last day will look just like this.” As Pike speaks, the video montage continues, with satellite clips of the planet in partial nuclear winter, rings of fire dotting the Northern Hemisphere.

I was confused by Captain Pike’s words, and Anson Mount’s woodenness in delivering them.

I thought, “Whose freedoms? Whose ideas of liberty?”

The people of the mid-23rd century are somehow technologically advanced enough to capture video footage of the entire world on fire while also being too ignorant to understand that fascism and eugenics are not “competing ideas of liberty.” If there ever is a Eugenics War, it will not be a fight for freedom, it will be a fight to oppress billions for the benefit of a select few. The scene played to me as if Pike was making a begrudging acknowledgement of white men’s inability to keep themselves from destroying the planet, a weak plea from someone who doesn’t quite believe what he is saying. In a way, Mount’s performance was truer to life in present-day America, where no white man can ever be sincerely sorry for breaking the world.

Producers, writers, and other creatives should be long done casting a series meant to replicate a world dominated by the global north after an apocalypse. Yet they can’t help themselves. Even when Black actors and actors of color turn in great performances, they see their consumers as white men and white boys. They still prefer eating Wonder Bread, even as it provides no substance, even if it kills them and aging viewers like me.

Donald Earl Collins is a freelance writer and historian who has written on the topics of multiculturalism, education reform, race, and the history of African American and American identity for more than twenty years. He has published in The Washington Post, The Atlantic, Al Jazeera English, The Guardian, Huffington Post, Diverse: Issues in Higher Education, Pittsburgh Post-Gazette, Atlanta Journal-Constitution, History of Education Quarterly, Teachers College Record, Academe Magazine, Radical Society, and the Journal of Hispanic Higher Education. His publications include narrative profiles and stories, op-eds, book reviews, scholarly articles and feature articles, review entries and book chapters.